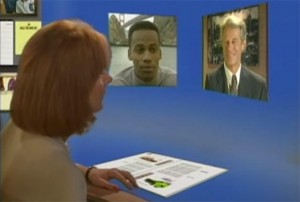 Mentalfloss dug up an episode of the popular American computer science series, the Computer Chronicles from twenty years ago. In the selected thirty-minute episode, anchorman Stewart Cheifet presented some innovative technologies that were envisaged as the possible future for PCs. Most of the devices are so spectacular that it is worth watching the video even if you are not in the possession of the English language.
One of the devices, called Sun Transphone, recalls an oversized smart phone that looked like a fax machine. It was a telephone and terminal in one. It could perform a number of PC functions, it could be used for bank card transactions, and as the company representative pointed out it had two telephone lines, one for talking on the phone, the other for surfing the net at the same time! If you were a kid in 1996 or not even born then, you will probably find it hard to imagine that you connected to the internet via a telephone line, and it was not possible to make a phone call and surf the internet simultaneously using the same line before ADSL was introduced (or before the wonderful world of parallel ports arrived).
The video also presented Pippin, Apple’s attempt at video game consoles, BeBox a multiprocessor PC (you are back in 1996!), and Pilot, a touch-screen something that may be called a smart notebook, and could be regarded as one of the forerunners of smart phones. It was before Pilot was named Palm Pilot, and palm devices would spread as a new product line.
According to Mentalfloss, none of these technologies have made it into the future of PCs, yet they all have in a certain sense. Back in1996, visions on how machines would be used were not far off reality: work (still using PCs) and playing games using consoles or target hardware alongside PCs. Palm devices were a bit prematurely born, but the vision was right, though resolution and colours are better today.