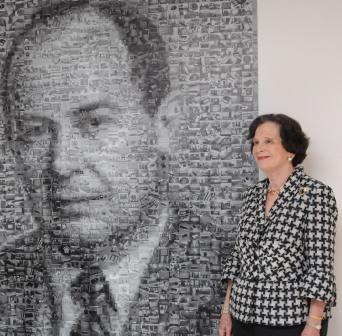 The Past of the Future ? From Punched Cards to Information Society conference organised by the John von Neumann Computer Society (NJSZT) was held on 25th June at the Albert Szent-Györgyi Agora, home to the Exhibition on ICT History. The world-class exhibition was opened by the honorary guest of the conference, Marina von Neumann Whitman, John von Neumann?s daughter and author of the book The Martian?s Daughter published in 2012. The main endorser of the conference was József Pálinkás, president of the Hungarian Academy of Sciences.

Reported on by a number of television channels and journalists, the event, attended by an audience of 200-250 people, was opened by NJSZT?s president, Ferenc Friedler, who handed over awards to all those who had made invaluable contributions to the creation of the exhibition. One of the awardees was Győző Kovács, a polyhistor scientist, who regretfully deceased at the end of last year. The award was handed over to his widow by Friedler, who emphasized the role of the family in the life and activities of Győző Kovács in his speech. Next to be awarded was Dániel Muszka for his lion?s share in the work of bringing the idea of the exhibition to reality, and his efforts in collecting a number of unique vintage machines to exhibit. Dániel Muszka developed and built the first Hungarian robot, the Ladybird, which was presented in London last year, and received international recognition. NJSZT?s managing president, István Alföldi was awarded for the tireless organising work he had put in, for the devoted activities he had conducted in order to acquaint the wider public with ICT relics, and for the substantial financial, logistical and intellectual support provided by NJSZT.

Following the award ceremony, Marina von Neumann Whitman, professor of economics, Michigan University, delivered her contribution. She told us about her life and career as an economist, and about the role ICT plays in our world today. She talked about her father, John von Neumann, who was both a theoretician and a scientist searching for quick, hands-on solutions to topical issues as well as about the Hungarian ?fellow geniuses?, called the Martians. She also made reference to game theory that received only belated recognition (Nobel Prize in Economic Sciences awarded in 1994). She described the two different paths daughter and father had taken that led to both of them acting as advisors to American presidents. We could also learn that John von Neumann was sceptical about the future of computer science. Self-evidently, Marina von Neumann Whitman also introduced her book awaiting Hungarian translation. She signed her book, sold at the venue of the conference, during the lunch break.

In his presentation Genius loci, Norbert Kroó, advisor to the president of the Hungarian Academy of Sciences, expounded on his chosen motto ?20th century was made in Budapest? by describing the spirit of the place and its influence on a great many Hungarian scientists and inventors. He talked about the Fasori Lutheran Secondary School, which educated many of our geniuses, including John von Neumann, Jenő Wigner and János Harsányi, but mention must be made of László Rácz, the eminent mathematics teacher, who had laid the foundations for the career of scientists who would shape the 20th century.

In his extraordinary contribution, László Kutor introduced NJSZT?s data repository of ICT history. Alternately using two of today?s most distinctive ICT tools, an iPhone and an iPad, he brilliantly demonstrated what he intended to say. At the end of his presentation, he led the audience back into computer pre-history by delivering an accurate and precise overview of a museum piece, the Babbage-Nagy Table of Logarithms. Kutor talked about NJSZT?s mission, gave the background to the establishment of the data repository of Hungarian ICT history, and described the field of interest of the repository (?anything that?s not an object in the first place?). He talked about software, personalities, achievements and events in technological culture, about the history of institutions and associations in computer science, about books, documents, photos and films. He paid his respects both to the great scientists of the past and the next generation of scientists to come in the future, while he introduced his audience to the evolution of data repositories, and shared the secrets of the John von Neumann Numerical Integrator and Automatic Computer, the JOHNIAC (nicknamed ?Pneumatic?, it was afraid of the dark), which ran 500 thousand hours between 1953 and 1966.

In his presentation The power of touching: technological, intellectual and societal intersections in information history, László Z. Karvalics adopted a holistic approach to draw up the outlines of the past, present and future in computer science, the sociology of numerical pressure, the embeddedness of hardware in the history of technology, the cultural history of programming and automation, and the mechanization of algorithmizable brain work. It was amazing to find out that ?complex information space? had already existed before the ?information age?: the first commercial OCR, the first digitally scanned photo, the first computer graphics, the first computer-generated music and film, the first embedded system, speech synthesis, archetypes of computer games were created between 1955 and 1962. Zoo informatics, from the geese of the Capitol through bats to bees finding land mines, illustrates that information technology is nothing else but ?extending our biologically given ability to manage information to an operation domain?. The future, man-machine hybrids and the world of the ?internet of everything? are just another step from here.

The successful delivery of conferences is significantly determined by the organisation and quality of lunches. The excellent choice of buffet lunch offered to participants satisfied all tastes from vegetarians to meat lovers, and caused no delay in the time schedule.

After lunch Zsolt Veres, director of IBM Hungary, presented IBM?s history of innovation from an international and Hungarian perspective. Veres talked about the Watson electric accounting machine of 1936, about the common denominator of the 1949 and 2011 ?big counting? (census) as well as about the local features of the company giant that has been present in Hungary since the 1930s. His presentation confirmed the motto of the exhibition: ?preserving values from the past, adapting to the present, influencing the future?.

IBM?s history was followed by a round table discussion moderated by Zoltán Alföldi, the host of the conference, whose person was a perfect choice to chair the entire conference. Alföldi led the conference in an easy-going but professional manner, speaking not a word more, nor fewer than necessary to connect thematically versatile presentations in a coherent unit. Alföldi expertly moderated the round table discussion on economics as well, with contribution from György Barcza, senior analyst, Századvég Foundation, Attila Szalay-Berzeviczy, former chairman of the Budapest Stock Exchange, and Kornél Sarkadi-Szabó, strategic director, Hungária Equities.

The event was closed by viewing the exhibition. The knowledgeable and affectionate guidance of Mihály Bohus through the exhibition was a treat: the pioneering days of John von Neumann and his Hungarian contemporaries were memorably brought back; retired computer devices ?came to new life?.

Conferences are usually evaluated positively if half of the presentations prove to be of interest. It extremely rarely happens that all the contributions are fascinating. The Past of the Future was one of these rare examples. Many thanks for the organisers and contributors alike!