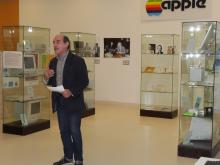 The exhibition entitled The Apple Never Falls Far from the Tree was opened on 6 October in Szeged as a result of the joint initiative of the John von Neumann Computer Society (NJSZT) and Károly Nagy, a private collector. A part of the collection was already put on display in the Youth Centre in Újpest, Budapest in September. The new exhibition in Szeged also includes additional items from local collectors and can be viewed until the end of the year 2016 in the same exhibition space as NJSZT’s permanent exhibition The Past of the Future, which presents a collection that rivals in size the collections of the world’s four or five most significant museums for computer history. We may as well say that the permanent exhibition presents the "tree" that bore the "fruits" that can be seen at the temporary exhibition on personal computers.

At the opening of the exhibition, Hédi Orbán, director of the Szent-Györgyi Albert Agora greeted the audience attending the event, among others many students from Szeged and the representatives of the press.  The opening speech was delivered by NJSZT’s managing director, István Alföldi. In his speech, he stressed the important contribution private collectors make by preserving unique items for generations to come. NJSZT, being a scientific association that takes responsibility for preserving the values of the past, launched a unique initiative when it undertook the task of assembling a collection that normally museums gather to serve public interests. NJSZT’s permanent Exhibition on Computer Science is regularly complemented with temporary shows that present items from private collectors for instance. After many years of collaboration, this is how items from the private collection of Károly Nagy came to be displayed alongside NJSZT’s permanent exhibition.

The exhibition was a huge success in Budapest, it was viewed by nearly a thousand visitors in a week, among them many groups of students saw it, highlighted István Alföldi, who also expressed the hope that the "Apple exhibition" will be a favourite among students in Szeged as well. The students attending the opening event were fascinated by a switched on Apple II and the SummerGames running on it as well as by the rarities displayed in the showcases.

These items were put on display not only thanks to Károly Nagy and NJSZT’s relevant contribution to preserving museum pieces from the past for the future, but also to a number of firms and individuals based in Szeged, among others Vintage 52, the daily newspaper Délmagyarország and István Hannus, a professor of chemistry.

Professor Hannus also attended the opening event, and his loan of an Apple Macintosh from the late 1980s and its carrier bag resembling a large-size rucksack are displayed in one of the show cases.

The opening was concluded by a guided tour led by Károly Nagy and Gábor Képes, NJSZT’s senior member. István Alföldi introduced them as the "two Steves" with reference to Apple founders Steve Jobs and Steve Wozniak.

"Now let’s see how the outfit of Steve Jobs changed between 1998 and 2010", Károly Nagy asked the question to start the tour. The picture he was holding in his hand was a proof that there was absolutely no change, Steve Jobs never gave up wearing the emblematic blue jeans with a black top. And it was no coincidence that Károly Nagy also chose to wear an outfit like this for the event.
It was an experience to see how students reacted to the shoe-box-size 5 MB hard drive of Apple Lisa from 1983 or to the bag-size radio telephone that could be connected to a PowerBook (and the two together would function as a fax machine).

They were similarly fascinated by the richness of design and the outstanding quality Steve Jobs always insisted on.

Steve Jobs died on 5 October five years ago. The opening event took place one day prior to the fifth anniversary of his death, but his personal charm and the values he represented are still influence the world of computer science today.